The story of the death of Countess Cornelia Bandi is simple. She went to bed at about 5 o’clock in the morning of March 15, 1731, but six hours later her remains were found next to her bed and competely burnt from the legs up. The room and adjoining rooms were covered in greasy soot and showed evidence of exposure to considerable heat. Apparently she had got up from bed and died almost instantly, and the oil lamp which she had been holding set her night dress and then her body alight. 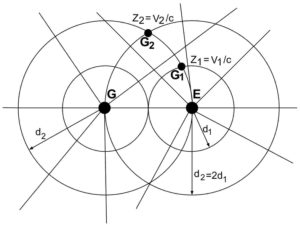 Skepsis studies remarkable claims, and many claims of the Italian-American Dr. Ruggero Santilli are very remarkable. Since 2007 he denies the expansion of the universe and since 2012 he uses this picture to prove that the expansion is contradictory. G, G1 and G2 are galaxies, E is Earth. When G1 and G2 move away from E with speeds proportional to the distances, this cannot be the case for G, he says. In the ‘proof’ Santilli forgets that G moves as well. Actually Euclid, 2300 years ago, could have explained to him why he is wrong.
Roughly every 130 years all galaxies are farther away from us by one millionth of a percent. It follows that the distances between all galaxies increase by the same amount, namely 0.000001% and of course that about one hundred million times 130 years ago, i.e. 13 billion years ago all distances were near zero.

Santilli has publication lists on his own websites, but these are riddled with errors, doublures and omissions. Moreover, he omits writings of Kadeisvili (over 40 items) and Fleming (29 items). I am quite sure that these are also his products. (*) Below is a list of writings with scientific pretentions. It is ordered by year, and fairly complete.

Does Santilli deserve a Nobel prize (look for ‘Nobel’ below), or is his prolific work more in line with his ‘no expansion’-proof above?  You be the judge.