Phyllis Newcombe, in daily life managing a confectionery shop owned by her father, attended a ball on the occasion of the first match of the season of the Chelmsford City Football Club, on Saturday evening, August 27, 1938. The party was over at the stroke of midnight. The revelers left the ballroom in the Shire Hall and so did Phyllis and her fiancé Henry McAusland (‘Mac’). While they were walking to the staircase, Mac was two or three paces ahead.

At that moment her crinoline style dress of white net over satin, that was sweeping the floor, starting burning fiercely on the front bottom side. The fire quickly spread, bystanders tried to help, at 12:15 a.m. an ambulance was called, which arrived at 12:35. Phyllis was brought to the hospital with severe burns. Initially she seemed to be well on her way to recovery, but then sepsis set in and she died of the ensuing pneumonia, on September 15, aged 22.

During the inquest possible causes were discussed. It was established that the material of the dress could not catch fire from contact with a lighted cigarette. However, it flared up when it touched an open flame. So the dress must have caught fire when it made contact with a flame on the ground, from a burning match for instance. A burning match that is dropped on a hard surface goes out by the shock, but if the floor is soft, the match might continue to burn for at most five seconds. In other words, just the time for a few steps.

No burning match was seen and no burnt match was found. Little wonder, because people must have been passing there quite a few times until the ambulance came, and the crinoline might have displaced the remains of the match as well.

The coroner: ‘Just imagine someone dropping a lighted match on that rubber floor. It would certainly go on burning and have been noticed. Still, if nothing was found, it is no use theorising about it.’

Now where could a burning match have come from? That is not a difficult puzzle. Smoking was forbidden in the ballroom. What is the first act of a smoker after spending a few hours in a no smoking area? They light up. If they aren’t careful, the used match is not extinguished.

How could the coroner be so certain that a burning match on the floor would have been noticed? All it took was a few seconds to continue burning. Only if Phyllis had been paying close attention to the floor just in front of her, she could have noticed.

Because there were no witnesses that had seen a burning or burnt match, the coroner thought it a mysterious case.

This accident attracted a lot of attention, not only in Chelmsford, but also elsewhere. In all of the UK there were about 40 newspaper stories about it. Maybe more. The British Newspaper Archive frequently adds more newspapers.

Phyllis’s funeral also took place with a lot of attention. Her grave in Chelmsford (plot 3605) is unmarked however. The event was mentioned (without her name and with a few mistakes) in a booklet about the history of the Shire Hall in Chelmsford, at least, that was the case 20 years ago.

The reason to discuss this tragic accident at all, is that a purveyor of paranormal pulp summarized the case in a 40 word paragraph in a magazine article about mysterious deaths (airplane crashes, dead birds dropping from the sky and mysterious fires). In 1957 he repeated the story, but with all kinds of lurid extra details. From there it was copied and copied by other sensational writers, each time with new additions or changes.

In the last stage the names of the victim and her fiancé and the coroner were different, her profession too, the location was a crowded dance floor in Soho, in October in the late 1950s, and the victim burst out in blue flames and was reduced to ashes in minutes.

I was able to find out what really happened (with the help of many skeptics elsewhere), and also how the story evolved between 1942 and about 1995. Only a few of the writers took the trouble of looking at the original sources – and then still clung to the horror version.

I have written it down (2001), the story is on this website and also all the sources can be found there. Recently I was studying similar cases. Using the British Newspaper Archive I could locate many more sources for Phyllis. Mostly they were small variations on the same story. 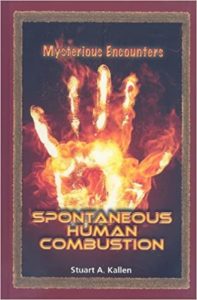 In my researches I discovered a booklet titled Mysterious Encounters: Spontaneous Human Combustion (2009), by Stuart A. Kallen, who specializes in children’s books. It’s about 7000 words (roughly six times the length of this post) and filled with mainly nonsense. Don’t buy it. He also tells the horror version of Phyllis’s death (crowded dance floor, blue flames, turned to ash in two minutes). He carefully pretends to give his source, namely an article by a person called Nienhuy [sic] on this website. But he produces quotes that strongly suggest he has also perused the accompanying sources. In a separate information box he mentions that this Nienhuy has another explanation.

Even worse is an anonymous ‘poem’ from 2005, from which I just quote one line:
“who probably spent 3 or 4 months perfecting a pink organdy gown”. You’ll have to google this rubbish yourself.

I find that highly irritating. I explained carefully how the story evolved, making it crystal clear that all those authors suffer from overactive sensationalism in combination with laziness, because they copy each other without bothering to investigate the sources. Mr. Kallen did have a lot of sources and even so he still makes it into a horror story – with factual errors.

For example, Kallen writes ‘Investigators … assumed someone had accidentally touched a cigarette to the gown’. But it was only Mac who thought so, he didn’t investigate anything, and Phyllis’s father had refuted this idea already by experiments at home, which were repeated at the inquest.

The positive moral of this story is that when one reads an incredible story about a miraculous event, the prime suspect must be the imagination of the author rather than some supernatural agent, and the more so if the author’s agenda is to propagate the reality of a particular kind of miracle or if he relies on other fanciful writers or if he just trying to make a quick buck. Even if the author is an eyewitness to the event he or she should only be trusted with what he has seen or heard him or herself.

The sad truth is that it happens all too often that stories are distorted to make them more interesting.

Respect for the dead means that distorting the story of the death of others for profit or to attract attention is just ghoulish. That’s why I find it so distasteful.