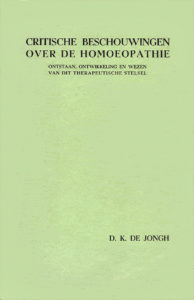 In 1943 David Karel de Jongh M.D. defended a Ph.D. dissertation on homeopathy, which he ended by concluding that homeopathy should be abolished. He based his judgment on his meticulous examination of many hundreds of articles and books and his experiences while working for quite some time in a homeopathic hospital in Utrecht.

The dissertation is digitised in its entirety, and can be downloaded here. De Jongh’s conclusions are still as valid as ever, as has already been observed by C.P. van der Smagt in his booklet Homeopathie, het wonder van het gelijkende which can be found elsewhere on this site.

Only a few people have any idea of the extent of the messiness and incoherence that is homeopathy. The general public thinks it has something to do with innocuous herbs, and those who know a little more think it is about extreme dilutions.

The core of homeopathy, however, is the similia principle. It was thought up by Samuel Hahnemann in 1796 and went something like ‘if you want to cure a sick person, first you establish their symptoms, and then you search for something that produces the same symptoms in healthy people’. It is unclear how Hahnemann got this idea, but he referred to a 1738 book whose author, Johann Christian Hummel, discusses a Danish army doctor named Stahl, who seemed to be quite famous in Denmark and who explained his own success by stating that the best way to treat the sick was by ‘similia similibus’.

Cars need gasoline and a washing machine will stop running the moment you pull the plug. This is because energy can be converted from one form to another, but it cannot be made to magically appear out of nothing. Anyone making claims about an engine running without an energy input is either a swindler or … Meer lezen

May 2014 saw the market launch of the Liam F1. A lot of publicity surrounded the roll out of this new wind turbine. It weighs just around 55 kilograms (120 pounds) and it measures 1.5 meters (5 feet) in diameter. 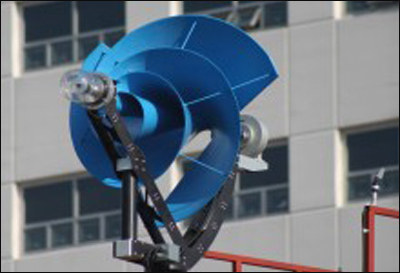 The idea would be to ultimately put it in large numbers on roofs and on top of street lights. Individual consumers would be able to bring down their electricity bills significantly. However, with some simple high school math and physics it is easily checked that the claims are exaggerated.