There doesn’t exist such a thing as Spontaneous Human Combustion (SHC). True, if a human body is exposed to temperatures over 700 degrees Celsius, it will burn if enough oxygen is present. The hidden assumption in the SHC myth is that humans are special, because the phenomenon of an animal suddently bursting out in flames has not been observed.

What does happen sometimes is that the clothes of incapacitated or suddenly deceased persons catch fire from an open flame, and then the wick effect (the textile acting as a wick for the body fat) takes over, of course only when nobody else in present. This happened somewhat more often to alcoholics. The reason is not that alcoholics are sometimes too drunk to notice that they are on fire. Indeed, alcoholics often have great tolerance for alcohol, so they don’t pass out easily. But their chance of dying of a sudden heart condition is greater.

What also happens is that people become victim of fire and subsequently sensationalist writers exaggerate the story.

I investigated the story of Phyllis Newcombe (22). Her crinoline style dress caught fire after she left a dance party and she died almost three weeks later in hospital. This happened in 1938 in Chelmsford. After the sensationalists had been at work, the story became that of Maybelle Andrews bursting in flames on a crowded dance floor in Soho in the 1950s. Supposedly she was turned into ashes in minutes.

The whole tale is here, and all the sources, many newspaper articles, can be read here.

Matt Mills wrote about three other cases in Skepter, spring 2021.

The first is that of Maud Comissiong (54). Her clothes caught fire, most probably when she was using a burning piece of paper as light source in the cabin of a rented cabin cruiser in the harbor of Great Yarmouth. This also happened in 1938. She died next morning in hospital. She was alone when it happened, but this stopped sensationalists not from making it a story about Mary Carpenter who burst out in flames in a small wooden boat on the lake (or the lounge of a luxury yacht), and was consumed in minutes in front of her husband and children. All newspaper sources are here.

The second is that of baby Peter Seaton (11 months) in London. Something in his room caught fire after 4:30 a.m. on Christmas morning 1938, and at 7:00 a.m. the alarm was raised, Peter’s room was an inferno by that time. The fire department could not find anything in his room that might have started the fire (although an educated guess is certainly possible). Sensationalists changed this into the assertion that miraculously nothing in the room had any fire damage. Hence it must have been Peter himself who was the source of his own destruction. The basic recipe is of course that if you can’t quite make sense of a second hand story then a miracle must have occurred. Newspaper sources are here. Also typical: the sensationalists don’t bother to read the newspapers, and take the reported date of the newspaper (that reports on the inquest) as time of the fateful fire. 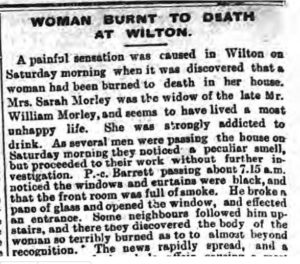 The third is that of the widow Sarah Morley (born Rolfe, aged 72). Her death (1902) resembles that of the Countess Bandi. Both died in the night and were found the next morning almost completely reduced to ashes in a room covered in soot, and with clear indications that the temperature in the room must have gone up considerably. In both cases it is clear what the initial open fire must have been. The difference is that Sarah was an unhappy alcoholic widow of a bricklayer in the rural village of Hockwold cum Wilton and the countess was a very pious high class lady (a son of a daughter became pope Pius VI, who then promoted his uncle, a son of the countess, to cardinal). Reliable sources are here.

This Sarah Morley case was transformed into that of Euphemia Johnson (68) in London in 1922 who mysteriously burst into flames after taking a sip of afternoon tea. Strangely enough, not only nothing in the room had any fire damage, but even the clothes she had been wearing were intact. It is clear that this is pure fiction, and even where the sensationalist got the wrong date from, again, without bothering to go to the source.

Matt Mills originally had a lot of these sensationalist sources as reference, but it seemed somewhat of a waste to pollute the pristine pages of Skepter with this excrement of deranged minds. But here they are.

Crew, Robert and Miller, David 1982. Ripley’s Believe It Or Not: Book of Chance. Toronto: Ripley Books